We now have our planned 2019 opening dates – which can be downloaded in a PDF here: WMR 2019 Calendar – Public

We will be open our normal practice of ‘Weekends and School Holidays’ all year until the end of November.  However, we will also be open daily from April through until September; we trialled weekday trains in June and September in 2018, these proved popular so we are extending weekday running right through May as well.

The railway celebrates it’s 60th birthday in 2019 and we are planning a celebration weekend on the 27th & 28th April; expect to see all our engines running plus some guest engines for the weekend.  There will also be an exhibition showing the history of the railway as it developed over the past 60 years, plus the pioneering history of miniature railways in Watford – did you know the first miniature railway opened to the public was just up the road in Bricket Wood?

Watford’s Cassiobury Park has long been popular, its recent national awards proving how special it is.  One of its main attractions is the miniature railway, loved by young and old, and about to commemorate sixty years serving the public.

To mark this anniversary there is to be a public exhibition and a commemorative booklet presenting the railway’s history.  However, we would like your help.  Do you have any old photographs of the railway?  Do you have any stories or reminiscences of your time on it?

We want to include the cultural impact of the line; what it means to those living around Watford and the many users of Cassiobury Park over the years.  The railway has long been thought of fondly, and your input is vital to the success of this special anniversary year.

If you would like to get in touch, please do email on watford@minirail.co.uk – it will be greatly appreciated.

We are having a little bit of an experiment this September and adding some extra opening days!

In addition to our previously advertised opening at weekends, we will be open all weekdays in September 12pm – 4pm.

So the September timetable is:

Saturdays & Sundays: Trains from 11am to 5pm

These are the forthcoming dates we currently plan to run steam:

On steam dates we normally start with a diesel first thing, with steam running from approximately 1pm

All dates are subject to weather and mechanical availability.  Please check our Facebook page for any updates.

The steam locomotive Marri has returned back to the WMR after a 15 year absence.

Marri landed in the park on Tuesday 3rd April.  Once steam was raised and a few test runs had been completed, she pulled her first passenger train at the end of the day.  Her first full day in service, Sunday 8th April, was rather damp, but still many people came out to enjoy a steam train ride through the park for the first time in a decade!

Marri will now be running most Sundays, Bank Holidays and some weekdays during the peak summer period.  Full details of her planned running dates can be found here.

We are very pleased to announce that steam trains will be returning to the WMR this summer. 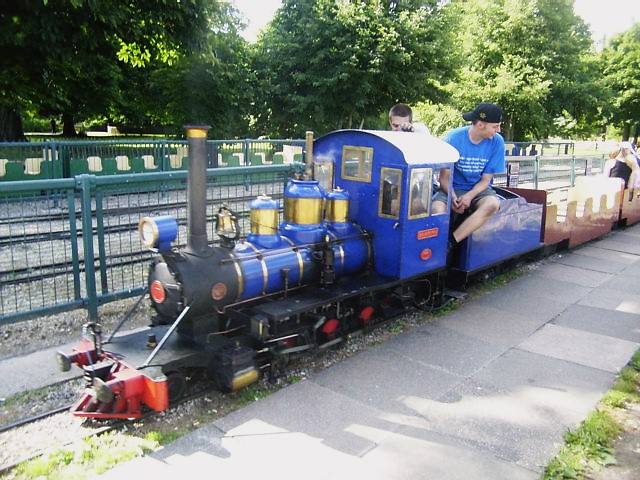 The steam locomotive ‘Marri’ was a regular sight in Cassiobury Park during the 1990s and early 2000s, until she was withdrawn for an overhaul at the end of 2003.  Unfortunately this overhaul took much longer than expected, and Marri has now spent over a decade in pieces.  When the railway was sold to new owners in 2017 Marri was not included in the sale, but we have now reached an agreement which will see her return to the park. 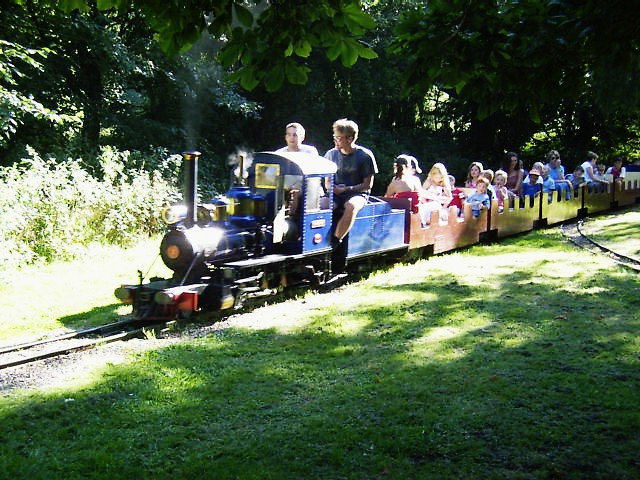 Marri was built by Willis Light Engineering of Perth, Australia in 1993.  Specially commissioned for the WMR, she was flown over from Australia in the hold of a jumbo jet, and ran for the first time at Watford the same day she landed at Heathrow!  Marri has only ever run at Watford, so it is very pleasing to be able to bring her back home.

We will now be working to reassemble Marri and plan to have her in service for the summer.  A return date will not be known until the work is nearing completion, but we will publish it as soon as it is known! 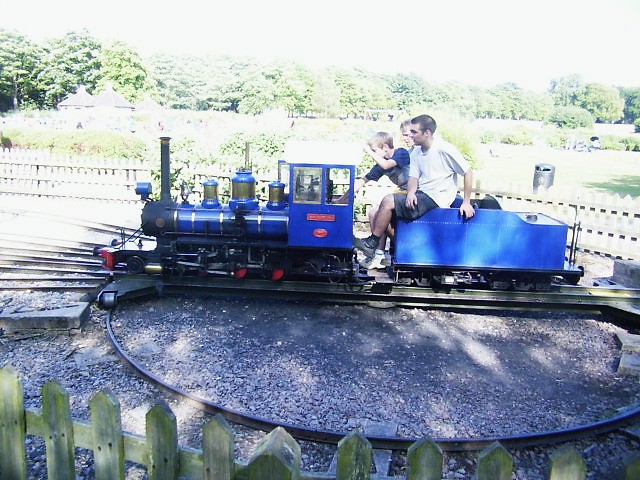 Over the night of Saturday 9th/Sunday 10th December a few inches of snow fell in Cassiobury Park.  Although many other railways, attractions and events closed due to the snow, some of our hardy staff cleared the line and we ran trains for a few hours on the Sunday afternoon.  As you can see this produced some delightful scenes of Nikki Louise running in the snow! 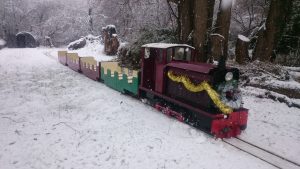 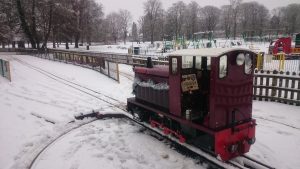 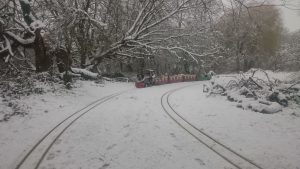 On Friday 27th October – in conjunction with the ‘Park in the Dark’ event organised by Watford Council – we ran after dark Ghost Trains through the woods!

Passengers climbed aboard our train at the station and soon found themselves travelling round a woods haunted by ghosts, skeletons, witches and other spooky characters.

This was the first time an event like this has been tried at the WMR, and judging by the queue at our station all evening they were extremely popular.  Since the event we have had a number of visitors contact us to say how much they enjoyed the experience.  Although we can’t give a definite commitment just yet, we hope the Ghost Train will return in 2018 – with a few more spooky improvements!

Now the railway is in new hands we’re asking for suggestions from the public on how we could improve the railway.

As it stands the railway is a bit of a ‘blank slate’ – there is lots of potential to improve and smarten up the railway and the grounds it runs through.  We have a few ideas of our own, but would welcome ideas from the public.  If you have any ideas simply get in touch with us, and we will try to look at all the suggestions we receive!

The 1st July was a significant date for the Watford Miniature Railway as the railway changed hands and opened under new management.

The new owners are Southern Miniature Railways Ltd, a small company originally based in Cornwall which has been involved with miniature railways for a number of years.  After 38 years, former operator Jeff Price is now enjoying a well-deserved retirement from running trains in the park!

The railway will continue with ‘business as usual’ for the summer months.  There are a number of ideas in the pipeline for ways to improve the railway in the run up to its 60th birthday in 2019 – if you have any ideas or suggestions for the railway please let us know!

Southern Miniature Railways director Charles O’Mahoney commented “Childhood visits to see my grandparents in Watford were never complete without a trip to Cassiobury Park and a ride on the miniature railway – in fact I had my first train ride there at a few weeks old!  It is therefore particularly pleasing to be able to keep this much-loved attraction running, and secure it for future generations to enjoy.”